Circuit breaker manufacturers expect to ship 40 million units a year by 2024. So, having a working knowledge of these common industry and household over-current devices is important.

Chances are, even if you live in a home or working environment with a fuse box instead of a circuit breaker panel, you’ll still need to operate a circuit breaker sooner or later. This is especially true if you work with industrial or building automation and run your own circuits on or off the grid for your projects.

The truth is that circuit breakers offer great protection without the need to replace it (like you would a fuse) in the event of an over-current situation. Without further ado, let’s look at how to reset a circuit breaker. Read on to find out more.

What Does a Circuit Breaker Do?

An electronic circuit breaker switches off the power supply when an over-current or short circuit develops. But why does this happen?

Over-current conditions can happen for many different reason, including faults in the system, however, a common reason is running too many devices on one circuit. The general rule of thumb is to only load any circuit to 80% of its capacity.

So now we know how to not overload our circuits, suppose your breaker trips for no apparent reason? In that case, be careful. If the circuit breaker won’t reset, there might be a short circuit, which is a much more significant problem requiring an electrician to solve safely.

A Brief Explanation of Circuit Breakers?

Circuit breakers play a significant role in protecting the power system to preserve lives and protect essential equipment, gadgets, and other components from any harm caused by the fault current.

They help restrict the amount of energy flowing to a specific power source, such as outlets and appliances. If a circuit becomes overloaded, it will simply shut down to avoid significant electrical or safety hazards. 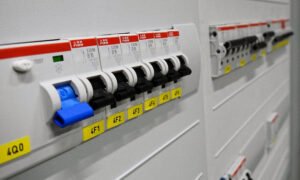 What Is the Reason for Circuit Breakers Tripping?

Overloaded outlets or too many appliances operating at once are the most typical causes of circuit breakers tripping. When an outlet gets overloaded, the circuit breaker trips, preventing an overcurrent situation, protecting your conductors (electrical wires) from heating up or melting, which in turn can cause and electrical fire.

Even if everything plugged in uses a meager amount of power, outlet extenders that add extra plug spaces can soon overwhelm an outlet. Running numerous high-amperage appliances at the same time may overload a circuit.

If you need to expand your outlet, always utilize a surge-protected power bar as an extra layer of security.

Fuse boxes provide the same function as circuit breakers, except instead of just resetting the switch, you must replace the fuse when it blows. These are typically in older homes; you must have new fuses on hand for easy repairs if you have one.

If your circuit breaker continues to trip, use a non-contact voltage meter to test it. Alternatively, there are two types of circuit breakers with a test button. They are as follows:

The AFCI (Arc-Fault Circuit Interrupter) or AFDD (Arc-Fault Detection Device) circuit breaker detects and trips when there’s are loose connections or hot wires caused by an overvoltage. It is also capable of catching and stopping harmful arcs.

The Ground-Fault Circuit Interrupter (GFCI) is a circuit breaker that protects the whole circuit, including all devices and appliances. When a piece of electronic equipment becomes wet, it turns off the power to prevent electrical shorts and unintended shocks.

The AFCI’s primary purpose is to safeguard the home against fires caused by arc faults. GFCI, on the other hand, is designed to protect individuals from potentially lethal electric shocks. Both are critical pieces of equipment that are included in an electrical system to ensure the safety of your property.

The reset methods for both AFCI and GFCI circuit breakers are the same. However, they have distinct characteristics or indications to show that the device needs resetting.

We recommend reading the handbook that came with your circuit breaker to know what to look for when it trips.

Steps to Reset Your Circuit Breaker

Unlike a fuse, which gets changed regularly, a circuit breaker usually doesn’t need to be swapped out. Instead, just reset to restore regular operation. Before resetting your breaker, use electrical gloves to prevent injuries.

Begin by evaluating every gadget or outlet that has lost power in your home or circuit loop. Turn off all lights and disconnect any appliances hooked into an electrical socket.

As you unplug appliances, keep an eye out for any wires that appear broken or are extremely hot to the touch. If you discover that a device is damaged or has overheated, recycle it and replace it.

Locate the circuit breaker box in your home. It may be in the basement, the laundry room, the garage, the hallway, or the utility closet.

When you open the breaker box door, you’ll see rows of individual circuit breakers. Bring a flashlight or your smartphone as a light source if the room is dark.

If the tripped breaker is in the “off” position, turn it back on. If it’s set to “neutral,” turn it off and then back on. Wait a moment. The breaker is reset if the switch stays in the “on” position. Contact an electrician if the button will not stay turned on.

After resetting the tripped circuit breaker, verify the circuit by turning on each light. If the breaker does not trip again, plug-in appliances one at a time. You’ve found the cause of the overload if the breaker trips. Reset the breaker and unplug any device that is causing the problem.

Test any smoke detectors connected to the circuit to ensure they are operational. If required, reset any clocks or security systems. Furthermore, evaluate the number of appliances plugged into a single outlet to prevent overloading the circuit again.

Sometimes there may be wiring faults with the appliance, or it may simply be dusty and overheating. Electrical items with exposed parts like unhoused computers or even guitar amps can be the culprits.

If you have very high-amperage equipment (such as air conditioners) connected into a single outlet, ensure they are on their own separate circuit.

What to Do if Your Circuit Breaker Trips Again?

If you reset your circuit breaker and it trips again within a few seconds, your system may have problems.

Damage to your electrical wires or the circuit breaker itself are two probable causes of tripping circuit breakers. The only way to be sure of your issue is to test your system. Sometimes you may need to consult a licensed electrician in your area.

When resetting your breakers, keep the following safety precautions in mind:

Where Are Your Circuit Breaker Panels Located?

Circuit breaker panels are also called breakers, and they are frequently found in garages, basements, or corridors and are used to breakers labeled by rooms or appliances. Circuit breaker panels can sometimes be behind furniture or wall art. If you’re having trouble finding yours, it should be in your house plans.

How to Replace Your Circuit Breaker?

When a circuit breaker trips frequently, it is typically due to a wiring problem, such as a short circuit or a ground fault, or because the circuit is overloaded for the amperage rating it carries. However, a circuit breaker might just wear out and become weak or fail.

Breaker failure can occur when a circuit fault causes a circuit breaker to trip too frequently, wearing out the internal switch linkage. Loss may also happen if you have used the breaker switch to turn the electricity too often. In this condition, you may need to replace the circuit breaker.

You require a replacement circuit breaker that is the same size, shape, and often brand as your present one.

You can replace the breaker yourself as it’s not a complicated task. Suppose you face any issue, call a professional electrician.

Everyone in your home should learn how how to reset a circuit breaker. It enables you to save money by performing simple troubleshooting yourself rather than hiring an electrician.

If you are an engineer or technician and have experience with electrical systems, you should register yourself with us for a ton of benefits and more helpful tips.