Very simply, an encoder reads movement and provides position feedback accordingly. In practice, an encoder converts motion to an electrical signal, and the signal is then sent to a control device in a motion control system like a PLC controller or even a simple counter.

An encoder will then send a feedback signal that we can use to determine the speed, direction, count, and position of the movement. The control device can use the feedback provided by the encoder to perform a particular function, for example:

Why Do We Use Encoders?

The encoder is an essential device in any application that requires feedback information, and there are so many of these applications nowadays across virtually all industries.

Many applications now required feedback in speed, position, direction, or distance, and an encoder allows users and controllers to use the feedback for precise control.

Encoder applications are all around us, and below are just some of the countless examples available in our everyday lives:

What Are The Types of Encoders?

We can actually differentiate encoders in several different ways:

1. Based on the position measured

A linear encoder can be a sensor, reading head, or transducer that is connected to a scale. Basically, it works by having the sensor reads the scale and then converts the position into an electrical signal.

Although linear encoders can use many different methods to perform the encoding function, the basic method is to use a magnetic sensor together with a magnetic scale to produce analog output (typically TTL).

The magnetic sensor passes along the magnetic scale and allows the sensor to detect the change in the magnetic field, which will then be converted as an electric signal.

Since this method detects changes in the magnetic field, it won’t be affected by the interference of light, dust, oil, and others.

Another common method is to use optical scanning for the encoding purpose, mainly by using photocells. The encoder’s scale will then transform the detected light beam as the scanning unit moves, which will produce sinusoidal wave outputs as the feedback.

Rotary encoders— also called shaft encoders— convert angular positions of a motion of a shaft (or axle wheel) to output signals as feedback.

Rotary encoders are used in various applications where rotating motions are involved that also require control and/or monitoring via feedback. This includes many industrial control applications, the automated motion of photographic lenses, robotics movements, and so on.

There are many different methods for rotary encoders to work, but the four basic types are:

Both linear and rotary encoders can be differentiated into two main types: absolute and incremental based on how they work. The main difference is that an absolute encoder will detect the absolute position of the encoder, while incremental encoders will only detect changes in movements.

An incremental encoder has two output signals: A and B, which are quadrature-encoded. Meaning, when the encoder is moving at a constant velocity, each pulse has a 50% duty cycle with a square waveform, the A and B pulses have a 90-degree phase difference between them. 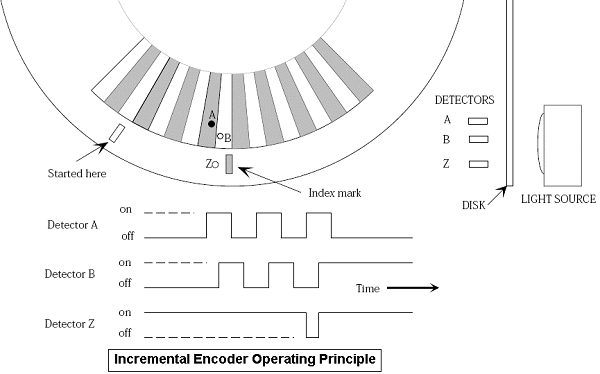 The main advantage of using incremental encoders is that they can report position changes almost instantaneously, so it’s often used in applications with high-speed movements that require near real-time monitoring and/or control.

Both absolute and incremental encoders use relatively similar technology, but an absolute encoder uses multiple bands to create a unique pattern on the disk to detect the exact position.

So, there’s no need to find the home or zero position after a loss of power. This is important in applications where we can’t always move the mechanism to a home position when there’s a power loss.

Difference Between an Encoder and Resolver?

A resolver, in principle, also works by detects position and speed, to be more specific the angle and speed of its rotor. So, on the surface, a resolver and an encoder might seem similar in functionalities.

However, they are actually very different in terms of the principle of operations and design:

An encoder, in this case, a rotary encoder to be a more direct comparison with a resolver, determines an angle of rotation of its own shaft. On the other hand, a resolver detects the angle and displacement speed of its rotor.

While as discussed above, there are many different methods and technologies used to make encoders, the main parts of all types of encoders are quite similar. We’ll use the basic parts of a rotary optical encoder as an example:

On the other hand, a resolver has very different basic parts:

Encoders are in general more accurate than resolvers. In encoders, the accuracy will vary according to the disk model, and the best optical encoders can detect up to 27-bit of data depth. In a resolver, accuracy is mainly determined by the number of poles on its stator.

Encoders are more complex to manufacture, so typically they are more expensive. The more accurate and durable the encoder is, the more expensive it will be. Resolvers, on the other hand, have a simpler design so they are typically cheaper.

It’s also much easier and cheaper to repair a broken resolver, with more accessible maintenance. However, you can’t use a resolver on its own, and you’ll need additional equipment with it.

Revolvers are generally more reliable and not prone to interference, so they can be used in extremely harsh conditions without issue. It is resistant to extreme temperatures, dust/debris pollutions, and vibrations.

Encoders, on the other hand, are very prone to interferences, and the most accurate encoders are even more prone to contamination, extreme temperatures, and other conditions.

Resolvers, on the other hand, work with an analog signal, and can’t directly integrate with increasingly popular digital systems. So, typically an additional converter is needed, which can add to the overall costs of the system.

There are only a few types of resolvers available on the market, and there are only two basic types based on operation principles: differential and receiver. On the other hand, there are various different types and variants of encoders, each with its unique measurement technologies and specific use cases.

We hope we’ve answered some of your questions with respect to what is an encoder, and have highlighted some of the differences between the various encoder types available. If you enjoyed this article and would like to become a member of the site, you can register here completely free.

If you enjoyed this article, consider checking out some of our other articles too: